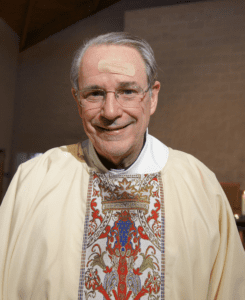 (678) 223-7353
Deacon Paul Franklin is a native Georgian.  Born in Athens, he lived in several towns, before moving to Valdosta, where he went to high school.   He graduate from Georgia Tech, and has Bachelor's and Master's degrees.  He married Margaret (whose parents were founding members of Transfiguration) in 1982, and they have four children:  Justin, Christine, Julian, and Samara.  His career took him from Atlanta to New Jersey, California, North Carolina, and again to New Jersey before returning to Atlanta.  Paul and Margaret currently live in Kennesaw. Deacon Paul was ordained in May 2012 in the Diocese of Trenton.  Deacon Paul has supported prison ministry, youth ministry, sacramental preparation, and adult faith formation.  He was assigned to Transfiguration in March 2017. Outside of church, Deacon Paul enjoys gardening and square dancing with Margaret.
View All Staff